When patients head to the hospital, they expect quality care in a safe environment as they recover from illnesses, surgeries, and injuries. Unfortunately, hospital-acquired infections often affect patients and these preventable infections have become a top killer. In fact, hospital-acquired infections rack up billions of dollars in health care costs annually. New studies show that television remotes in hospital rooms may be instrumental in spreading infection.

A study done at the University of Arizona led by Microbiology professor Chuck Gerba showed that the TV remotes in hospital rooms carry a significant amount of bacteria. Surprisingly, the remotes tested harbored more germs than any other surface in the hospital rooms, including the bathroom doorknobs. Bathroom doorknobs, toilet handles, bathroom sink faucet handles, in-room call buttons, bathroom handrails, and hospital tray tables were among the other surfaces tested within the rooms.

Fifteen different hospital rooms were studied and 28 television remote controls were tested. When tested, dirty remotes had an average of 320 bacteria, while other surfaces averaged only 91 bacteria. According to Dr. Gerba, “These numbers clearly show the remote controls as having three times greater levels of bacteria than any other site in the hospital room.”

When testing surfaces in hospital rooms, not only did the tests show that television remotes harbored a significant amount of bacteria, but the tests detected MRSA, which is a type of bacteria that is resistant to antibiotics. According to the Center for Disease Control, “Staphylococcus aureus [MRSA] is a leading cause of hospital-acquired infections.” MRSA often causes surgical site infections, pneumonia, and lower respiratory tract infections. It is resistant to penicillin, and most other antibiotics. Not only do these infections often cause serious illness – or in some cases, death – but they result in higher healthcare costs for hospitals and patients. Today, the CDC considers MRSA both endemic and epidemic.

Proven to spread infection in hospitals, television remotes pose a danger to patients. Dr. Gerba noted that, “If there are more bacteria on the remote control versus the toilet bowl flusher, then we need to do a better job to offset infection and deaths.” Rising to the challenge, Cleanint developed the CleanremoteUV, a device designed to eliminate germs from television remotes. Since most remotes fit into the device, it can be integrated into hospital rooms with ease. Instead of using disposable remotes – which some hospitals have chosen to do – CleanRemoteUV allows hospitals to continue using the same remotes, ensuring that germs are removed between each use, preventing the spread of infection. 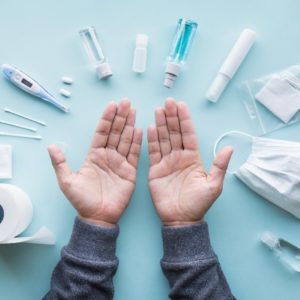 Why CleanintUV is better than the competition!

In a small experiment performed by our team, the disparity among CleanintUV and other market products was made very clear. The same dosimeters, using equal time, were used to measure each products UV-C output. Our CleanintUV offer up to 7 times more millijoules of UV-C light than other brands.

Stepping Into A New Decade!

With the year 2020 behind us, we are now stepping into a new decade. The previous year was a terrifying one for humanity. One thing is for sure, moving forward into the year 2021, we all have experienced the significance of disinfection thanks to the recent global pandemic.

It's Simple - It's Clean

drop us a line and keep in touch

Dr. Benjamin Tanner holds a B.S. in Molecular Biology and a Ph.D. in Microbiology and Immunology from the University of Arizona, where he studied environmentally mediated disease transmission and assessed infection risks for farm workers. Dr. Tanner is the founder and principal of Antimicrobial Test Laboratories, a microbiology laboratory that specializes in testing and development of disinfectant chemicals and other antimicrobial technologies. Recently, he founded Cosmetic Test Labs, a contract research facility focused on ensuring the safety and stability of cosmetic and other personal care products.

Professor Dasta was a member of the Society of Critical Care Medicine (SCCM) council, the governing body of SCCM, from 2007-2010. He is a fellow of the American College of Clinical Pharmacy and the American College of Critical Care Medicine. SCCM honored him by creating the Joseph F. Dasta Critical Care Pharmacy Outcomes Research Grant in 2000. Professor Dasta received the 2010 SCCM Distinguished Investigator Award and was the first pharmacist to receive this honor. Professor Dasta was the recipient of the American College of Clinical Pharmacy Education Award in 2002 and the 2010 recipient of the Sustained Contributions to the Literature Award by American Society of Health-System Pharmacists. He serves on the editorial board of Critical Care Medicine and Annals of Pharmacotherapy. Professor Dasta has over 250 peer-reviewed publications, abstracts, brief communications, and book chapters on topics including sedation, analgesia, acute hypertension, hyponatremia, sepsis, acute kidney insufficiency, acute heart failure, and pharmacoeconomics and medication safety of acute care pharmaceuticals. He has also given over 250 lectures on various topics related to critical care and health outcomes.